History: America’s Greatest Hits is the first compilation album by American folk rock trio America, released by Warner Bros. Records in 1975. It was a success in the United States, reaching number 3 on the Billboard album chart and being certified multi-platinum by the RIAA. It has also been certified 6 times platinum by ARIA for shipments of 420,000 copies in Australia

Stephen Cook: Mirroring the cover art depiction of America’s dual life in England and the U.S., History: Greatest Hits perfectly spotlights both the polished and layered production of British studio legend George Martin and the West Coast tones of the band’s folk-pop style. Featuring the group’s many chart toppers from the first half of the ’70s, this definitive roundup includes Neil Young-style acoustic sides like “Lonely People,” the hippie MOR of “Muskrat Love,” and breezy acid rock like “Sandman.” And even though Martin didn’t produce the entire lot of songs here, his sophisticated and mostly subtle way with strings, keyboards, and multi-track guitars is in evidence throughout. Adding to the fun are additional highlights like the updated surf cut “Sister Golden Hair” and ingenious McCartney-esque pop like “Only in Your Heart” and “Daisy Jane.” An essential collection for fans who like their ’70s folk with a pop sheen, loads of hooks, and top-drawer arrangements. 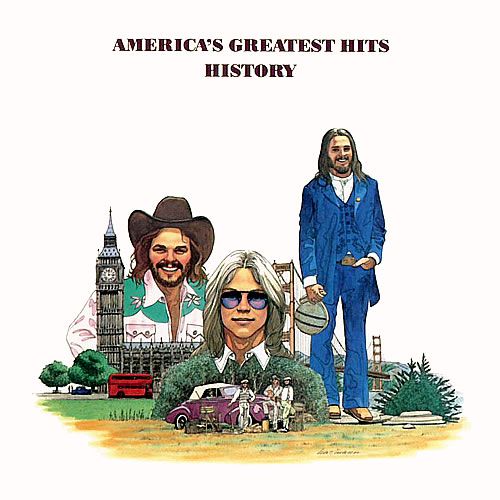