David Ross Smith: ‘Before And After Science is really a study of “studio composition” whereby recordings are created by deconstruction and elimination: tracks are recorded and assembled in layers, then selectively subtracted one after another, resulting in a composition and sound quite unlike that at the beginning of the process. Despite the album’s pop format, the sound is unique and strays far from the mainstream. Eno also experiments with his lyrics, choosing a sound-over-sense approach. When mixed with the music, these lyrics create a new sense or meaning, or the feeling of meaning, a concept inspired by abstract sound poet Kurt Schwitters (epitomized on the track “Kurt’s Rejoinder,” on which you actually hear samples from Schwitters’ “Ursonate”). Before and After Science opens with two bouncy, upbeat cuts: “No One Receiving,” featuring the offbeat rhythm machine of Percy Jones and Phil Collins (Eno regulars during this period), and “Backwater.” Jones’ analog delay bass dominates on the following “Kurt’s Rejoinder,” and he and Collins return on the mysterious instrumental “Energy Fools the Magician.” The last five tracks (the entire second side of the album format) display a serenity unlike anything in the pop music field. These compositions take on an occasional pastoral quality, pensive and atmospheric. Cluster joins Eno on the mood-evoking “By This River,” but the album’s apex is the final cut, “Spider and I.” With its misty emotional intensity, the song seems at once sad yet hopeful. The music on Brian Eno – Before And After Science at times resembles Another Green World (“No One Receiving”) and Here Come the Warm Jets (“King’s Lead Hat”) and ranks alongside both as the most essential Eno material. “

Brian Eno – Before And After Science Tracklist 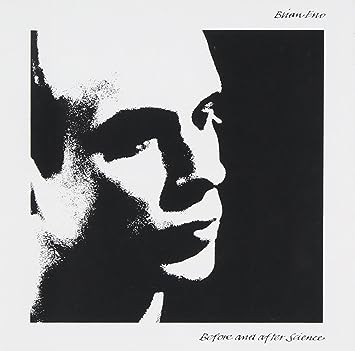