Dream Police is the fourth studio album by Cheap Trick. It was released in 1979, and was their third release in a row produced by Tom Werman. It is the band’s most commercially successful studio album, going to No. 6 on the Billboard 200 chart and being certified platinum within a few months of its release. Cheap Trick was exploring their range on “Dream Police.” Be that in Robin Zander’s polished vocal on “Voices” or in that Tom Petersen took to the mike for the stunning “I Know What I Want,” “Dream Police” became a showcase for the boys from Rockford IL. If you compare the Tricksters’ sound here to new wave acts like Blondie and the Cars that were now in the same arena (Blondie’s “Eat To The Beat” arrived roughly the same time as “Dream Police” and covers a lot of the same ground), you’ll see how Cheap Trick – Dream Police remains an excellent album from a band in their prime. ‘Stephen Thomas Erlewine’ Underneath the gloss, there are a number of songs that rank among Cheap Trick’s finest, particularly the paranoid title track, the epic rocker “Gonna Raise Hell,” the tough “I Know What I Want,” the simple pop of “Voices,” and the closer, “Need Your Love.” Still, Dream Police feels like a letdown in comparison to its predecessors, even though it would later feel like one of the group’s last high-water marks. 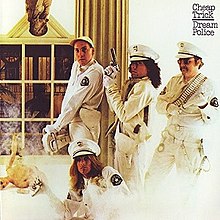