Wikipedia: Shamal is an album by Gong, originally released in 1976. The album was written and recorded without the group’s founder member Daevid Allen, and consequently sounds different with none of the hippy flavoured eccentricities of the previous albums. However, it still has a generally progressive rock-influenced approach (especially with regards to Steve Hillage’s guitar work), slowly drifting into a jazz fusion sound. It is usually regarded as a transitional album between Daevid Allen’s incarnation of the band and the Pierre Moerlen-led fusion lineup of the late 1970s. The album was produced by Pink Floyd drummer Nick Mason.

David Ross Smith: ‘Between Daevid Allen’s departure from the band and Pierre Moerlen’s official takeover of the band, there is Gong – Shamal. This transitional album contains none of the Allen-inspired psychedelia, but also very little of Moerlen’s jazz influence. Shamal is, for the most part, a progressive rock album, half vocal, half instrumental. Its most accessible tune, the opening “Wingful of Eyes,” had the potential for airplay if only it hadn’t been so lengthy. Penned by Mike Howlett, his not-so-great-but-appealing vocal style and lyrics will grow on you, given the opportunity. “Bambooji,” mostly instrumental, opens with Didier Malherbe’s flute, which at times gives this tune an Asian sound. Percussion and flute dominate and yield a Scottish feeling as well. “Mandrake” is the soft, laid-back piece on the album, followed by the closing title cut, a slight foreshadowing of the sound Pierre Moerlen and company assumed on the next several albums. Moerlen, an outstanding, classically trained drummer/percussionist, along with Jorge Pinchevsky on violin color this piece with a Mahavishnu Orchestra hue, although it’s still distinctly Gong. ‘ 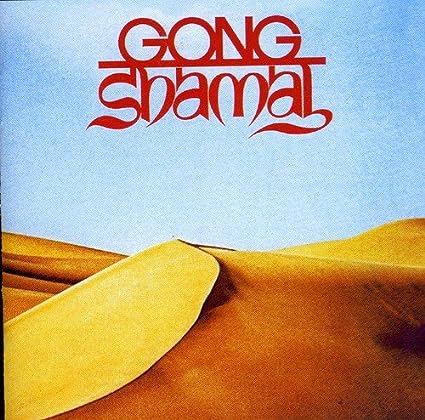