Published on 26 November 2019 by Streamy

Jim Brenholts: ‘Mirage is one of Klaus Schulze’s best albums. It is certainly among the eeriest e-music sets ever. He created it as “an electronic winter landscape dedicated to Hans Dieter Schulze.” It has somewhat of a symphonic structure. There are two main pieces: “Velvet Voyage” and “Crystal Lake.” Each piece has six separate movements with experimental sounds serving as the recurring themes. The album has cold and icy textures that take listeners to the brink of the winter solstice. The experimental timbres give the set a sci-fi feel. This is vital space music. It will appeal to fans of Kevin Braheny, Richard Burmer, and Mychael Danna. ‘

Progarchives.com: Probably the peak in Schulze’s entire career. This is one of those albums where everything just fell into place and sounds simpy beautiful. Right time right place, using the technology and ideas he’d built up during the previous five years. That’s how long it took him to finally release a faultless electronic album. …. ‘Klaus Schulze – Mirage’ is quite similar to ‘Timewind’ from two years earlier – which itself is a super album. Here though – the results just sound far more complete and accomplished. This is a very smooth and polished instrumental electronic recording with every bloop and bleep carefully inserted into the score. There’s no hurry or urgency – things just develop at their own pace in huge waves of artificial sound. I just love those old 70’s Berlin electronic recordings . They’re copied unashamedly today by the likes of ‘Redshift’, ‘Free System Project’ and ‘Radio Massacre International’ – all of which sound remarkably like ‘Mirage’. They even use the same equipment to try and recapture that realism that digital technology fails to do. A beautiful, clean cut and precise album which sits comfortably alongside ‘Ricochet’ and ‘Rubycon’ but without the heavy arpeggiator sound of the latter. ‘Mirage’ is probably more aesthetically pleasing and can be played late at night without neighbours banging and shouting in complaint. One of the last great analogue electronic albums that more than matches Tangerine Dream circa 74-76. Pure Electronics… and simply beautiful 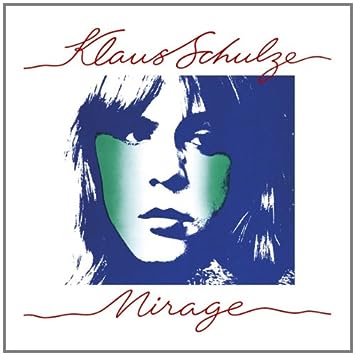