Published on 6 September 2019 by Streamy

Wikipedia: Led Zeppelin – Presence is the seventh studio album by the English rock band Led Zeppelin, released by Swan Song Records on 31 March 1976. It was written and recorded during a tumultuous time in the band’s history, as singer Robert Plant was recuperating from serious injuries he had sustained in a recent car accident. The album received mixed reviews from critics and is also the slowest-selling studio album by the band (other than the outtake album Coda), only managing to achieve triple-platinum certification in the United States. Nonetheless, guitarist Jimmy Page describes Presence as the band’s “most important” album, proving they would continue despite their turmoil.

Stephen Thomas Erlewine: ‘Led Zeppelin – Presence scales back the size of Physical Graffiti to a single album, but it retains the grandiose scope of that double record. If anything, Led Zeppelin – Presence has more majestic epics than its predecessor, opening with the surging, ten-minute “Achilles Last Stand” and closing with the meandering, nearly ten-minute “Tea for One.” In between, Led Zeppelin add the lumbering blues workout “Nobody’s Fault But Mine” and the terse, menacing “For Your Life,” which is the best song on the album. These four tracks take up the bulk of the album, leaving three lighthearted throwaways to alleviate the foreboding atmosphere — and pretensions — of the epics. If all of the throwaways were as focused and funny as those on Physical Graffiti or Houses of the Holy, Zeppelin would have had another classic on their hands.’ 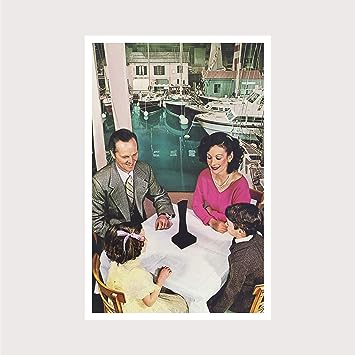