Published on 4 January 2020 by Streamy

Eduardo Rivadavia: ‘A mere six months after releasing their stunning sophomore album, Wheels of Steel, Saxon almost managed to top themselves with the equally timeless Strong Arm of the Law, forever after dividing their fan base over which of the two delivered the ultimate Saxon long-playing experience. This time, instead of motorcycle engines revving, it’s thunder and lightning launching the album in truly bombastic fashion via the embryonic thrashing of “Heavy Metal Thunder.” And then it soon becomes apparent that Saxon had learned a little something from their then-recent tour of England with Motörhead, because break-neck anthems like “To Hell and Back Again,” “Taking Your Chances,” the very naughty “Sixth Form Girls,” and the high-flying “20,000 Ft” just keep on coming at the listener, full speed ahead. A few more deliberate offerings are wisely sprinkled in to allow for some breathing room, and include the album’s ever-popular title track (based on the band’s true-life experience of being pulled over by highway police during their first American tour), the uniquely unimpressive “Hungry Years,” and the unusually political “Dallas 1 PM,” which details the assassination of President John F. Kennedy. In sum, as had been the case with Wheels of Steel, all the right ingredients pretty much fell into place for Saxon on this amazing record, and though it lacked as many clear-cut hits as its predecessor (namely “Motorcycle Man,” “747,” and “Wheels of Steel”), Saxon – Strong Arm Of The Law‘s unmatched consistency from start to finish makes it the definitive Saxon album in the eyes of many fans and critics. Suffice to say that you’d be hard pressed to find any New Wave of British Heavy Metal Top Ten list that doesn’t include both of these efforts, and we’ll leave it at that. ‘ 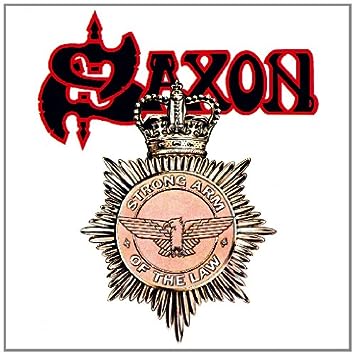