Heather Phares: ‘Though they still tend towards pastiche, the Dandy Warhols’ third full-length, Thirteen Tales From Urban Bohemia, presents a bakers’ dozen of their most focused and cohesive songs. Where their earlier albums were eclectic to the point of being scattershot, this release manages to limit the band’s style-switching to dreamy, sweeping epics like “Godless” and “Nietzsche,” sussed, sleazy power pop like “Horse Pills” and “Cool Scene,” and country and gospel ventures like “Country Leaver” and “The Gospel.” The group’s increasingly strong songwriting makes most of these experiments successful and distinctive, though the Dandys fall into their old habit of appropriating sounds they like wholesale with “Shakin’,” a “tribute” to Elastica’s uptight yet sexy riffs and rhythms. Not surprisingly, the most successful songs on Thirteen Tales From Urban Bohemia are the least derivative ones, such as anxious pop songs like “Solid,” “Get Off,” and the delicate, lovelorn ballad “Sleep.” On those tracks, as well as the satirical single “Bohemian Like You” — this year’s model of their hit “Not If You Were the Last Junkie on Earth” — the Dandys reveal themselves as a savvy pop band with a voice of their own. Though they’re not all the way there yet, The Dandy Warhols – Thirteen Tales from Urban Bohemia is a worthwhile step in their developing creativity. ‘ 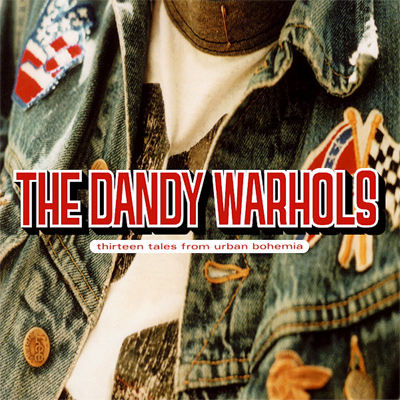