The Idler Wheel Is Wiser Than the Driver of the Screw and Whipping Cords Will Serve You More Than Ropes Will Ever Do, is the fourth studio album by Fiona Apple. Like When the Pawn, it derives from a poem written by Fiona. It was released on June 19, 2012, by Epic Records. It ‘s the Fiona’s first album since 2005, The Idler Wheel, is a 2012 Grammy Nominee for Alternative Album of the year. She has received countless accolades taking over Top 10 album lists from such credible sources as Time Magazine, New York Times, Pitchfork, Los Angeles Times, Rolling Stone, Stereogum and more. Fiona Apple’s newest release will not disappoint. It continues the strange, creative journey that Apple started in the 90’s but offers unexpected twists and turns. This is the most distilled Fiona Apple album yet. While her celebrated previous work was marked by eclectic musical flourishes courtesy of producers including Jon Brion and Mike Elizondo, The Idler Wheel is fearlessly austere in comparison. She worked with touring drummer Charley Drayton on the album, and his touches are light and incisive. Speaking of the record’s signature clattering percussion. This album isn’t always pretty, but it sure is powerful. While she’s never been known for her shyness, THE IDLER WHEEL… feels like her most confident and sure-handed album to date. This may be Fiona’s finest album, but will not please everyone. None of these songs are probably going to blaze up the top 40–but they should. None of these songs will give you peace, leave you alone, let you rest. They will infect your consciousness with their insistent beat, their multi-layered meanings, and their incredible vision. This is a mature album from an artist who is simply satisfied only when she has put out greatness. 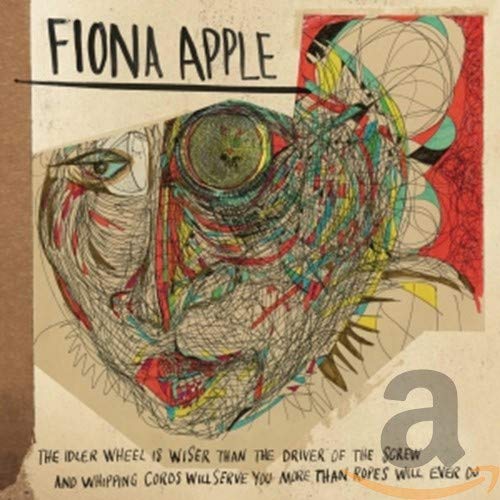