Killers is the second album by British heavy metal band Iron Maiden, released on 2 February 1981 in the UK, and 6 June 1981 in the US. The album was their first with guitarist Adrian Smith and their last with vocalist Paul Di’Anno, who was sacked after problems with his stage performance arose due to his alcohol and cocaine use.This was also the first Iron Maiden album made with veteran producer Martin Birch, who went on to produce their next eight albums before retiring after Fear of the Dark in 1992.  This album is fast and furious and features the debut of Adrian Smith on guitar. The best material on this album is on the second part. “Killers” is a powerful track. Steve Harris’ bass work is haunting! Paul Di’Anno’s vocals here are amazing, especially on the verse “God help me what have I done!” He put a lot of energy, feeling, and soul in his vocals. “Prodigal Son” shows Maiden’s versatility. It’s a mellow track with beautiful guitar work. Di’Anno has a more soulful voice than Bruce Dickinson. I think he does some of his best vocal work on “Twilight Zone.” The way he sings the line “deep inside me,” it really tugs at the heartstrings. He is also excellent on “Purgatory”. ‘Steve Huey’ Iron Maiden – Killers is clearly the work of a top-notch ensemble, and in order to take the next step forward, their musical ambitions were clearly going to require a vocalist as technically accomplished as the band. It’s worth noting that some Maiden fans actually prefer the rawness of the Di’Anno years to the polish of the Bruce Dickinson era (though, it should also be noted, they’re in the minority). 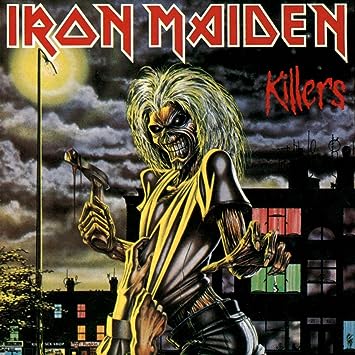