Mike Oldfield  ‘The Songs Of Distant Earth blend together two motifs crafted through Mike Oldfield’s atmospheric music. (Both outer space and inner space under water) are the themes of this album, but Oldfield’s synthesized artistry comes up short during the course of the 17 tracks, mainly because of the intermittent talking and unnecessary vocabulary that quickly becomes irksome and ineffective. About the music, it is usually Mike Oldfield’s differentiation of rhythms or styles on a song to song basis that makes his music thought-provoking and fresh. On this album, the same rhythm lurks through half of the songs, with only smidgens of add-on instrumentation to elevate its flow. Absent is the freewheeling percussion pulses, or the onslaught of strings that so often shower his music. Instead, each track seems flat as his keyboard work comes off gray and bland. Even a few sudden bursts of tempo become short lived, as the pace always falls back to its straight-lined origin. Inspired by Arthur C. Clarke, Oldfield tries to capture the wonder and mystery of the stars and the sea through washes of synthesizer, but his attempt at capturing both themes could have benefited from a multitude of other instruments, as his work usually includes. ‘ 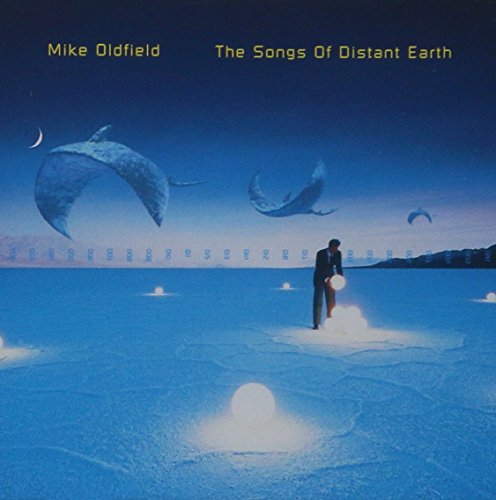