Silence Is Easy is the second studio album by English indie rock group Starsailor, released in September 2003 on EMI.      ‘Amazon’ Awash in the same Britpop romanticism of their debut Love Is Here, Starsailor – Silence Is Easy strains with the weight of the band’s next-big-thing status. In response to the clamor anointing them as the next Verve or Coldplay, Starsailor try to meet the expectations with sheer weight of conviction. They even lured legendary producer Phil Spector out of retirement to boost their sound into new realms of lovelorn sincerity. Occasionally, it works; “Music Was Saved” opens with a burst of sunny, Echo and the Bunnymen-like pop, as singer James Walsh sweetly layers his delicate voice through a brisk, catchy chorus. Also impressive is the title track, thick with tender emoting and soaring melodies. Too often though, the band gets stuck in syrupy sentiment, like a cover band playing to the cheap seats. 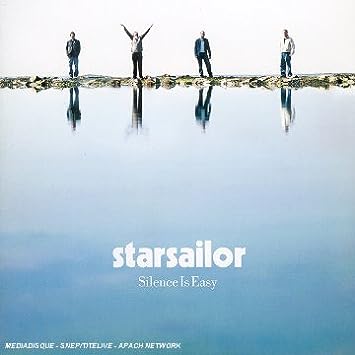